Driving high is the same as drunk driving now.

Starting Oct. 2, 2016 Ontario drivers caught high on drugs can now temporarily lose their driver's licence right on the spot, same as if they would if they were caught drinking and driving.

Starting this weekend if a driver is pulled over and fails a road-side sobriety test due to drugs, they will lose their licence for 3 days on the spot. It is the same penalty they would receive if they were caught driving drunk. The driver will also have to pay a $180 to get their licence back.

So what's a sobriety test for suspicion of driving high? Those tests include examining your behavior while standing on one foot or simple eye exams. Yes, if a police officer can tell that you're high and you're behind the wheel you will be charged same way as if you were drunk driving.

And things get ever worse for repeat-offenders. If you fail sobriety test you will be sent to the police station for more of testing, such as your blood pressure and body temperature will be checked by "drug recognition expert". So good luck to you if you're thinking you can "hide" any signs that you are high.

If you are caught high while behind the wheel and this isn't your 1st offence:

For drivers with 2 or more licence suspensions involving alcohol or drugs within a 10-year period, mandatory education or treatment programs, and installation of an ignition interlock device in their vehicle.

For more additional resources we invite you visit MTO's website and learn more about Vehicle Impoundment and Ignition Interlock Programs. 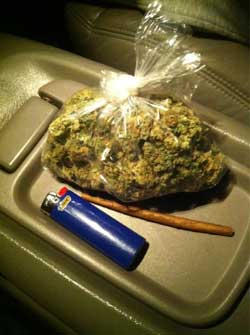